You’ve probably gathered by now that I’m a gadget guy. Some might even call me an early adopter although I’d argue that I typically wait for version 2 of anything brand new before I entertain buying it, which technically disqualifies me as early adopter. The “connected home” is one of those things I really didn’t “get”. I didn’t see the point.

That changed recently. It started with the replacement of my A/C, which was a big (and unfortunately expensive) project. Looking at whi 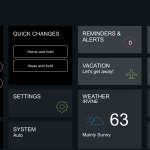 ch thermostat to use, I ended upwith the ecobee3, which – similar to the Nest – has a touch screen, proximity sensor, etc. The cool thing is that it connects to a remote sensor which I placed upstairs. Both the thermostat and the sensor not only register temperature, but also whether that level of the house is occupied. The system can now automatically and intelligently turn itself on and off not only vis a schedule but also based on whether someone is in the house. I can also make it so that at n 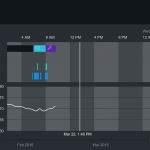 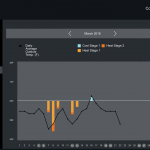 temperature and switch to different modes. The iPad app offers various stats on what’s going on in the house. I was starting to get hooked…

Then I was rethinking home security. ADT is not only not exactly cheap, but the technology started to look a little long in the tooth. So I selected the Canary home security device. It constantly monitors the downstairs area with camera (it also has night vision), audio 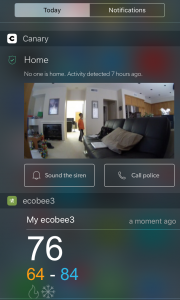 and motion detection. It arms and disarms itself when registered users enter and exit the house. It records audio and video snippets and makes them available within a timeline for viewing from all iOS devices. It sends notifications if activity is detected while the device is armed and one can trigger a built-in audio alarm and call the police remotely. Canary is supposed to “learn” patterns in order to automatically distinguish suspicious from normal activity. Of course a live video feed is also available (great for checking in on the family when I’m traveling) as well as widgets for iOS’s Notification Center. Oh, did I mention it also measures air quality, temperature and humidity over time?

Now it’s starting to make sense to me. While I don’t care about turning on lights from my phone or changing their color hue “automagically” in my home, monitoring temperature and home security make a lot of sense. It’s amazing how all this information is put at one’s fingertips and how seamlessly these systems allow for monitoring and controlling the home, no matter if you’re at home or somewhere halfway around the world. I sense this may be the starting point for more in future. Now I’m also starting to wonder what our homes will be like 3-5 years from now.

Like many of you have properly observed, your photo library is getting out of control. Every year, you seem to be taking more pictures than the one before and, oh by the way, the resolution of your cameras (point ’n shoot, cell phone, etc.) is getting higher and higher too. 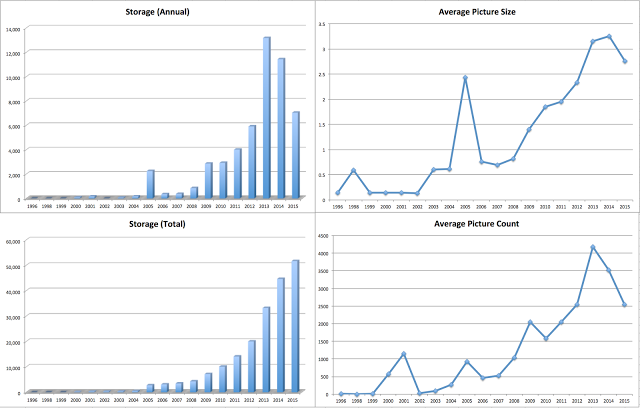 (The year 2005 is somewhat of an anomaly due to high-res, professional wedding pictures.)

Bottom line: total storage space required for pictures is growing exponentially. Although the number of pictures one can take per day is probably going to top out somewhere (hopefully somewhere below 1 picture for every minute of the day!), the resolution will keep climbing, at least for a while.
With the introduction of SSD drives, storage has become faster, but the cost per terabyte is still higher than for regular hard drives and capacity ultimately will have a hard time keeping up with the exploding demand, especially for the ubiquitous laptops. (If you’re working with a lot of videos in addition to images, all bets are off.)

Where does all this leave us? I believe that ultimately the solution will be to store all these pictures not on your hard drive, but in the cloud. Photo management software will eventually need to adjust and store only a subset of your library on your drive, maybe in the form of thumbnails and meta data (Apple’s new Photos app is already moving in this direction). For viewing and editing of your pictures, the originals would then have to be downloaded on the fly. All of this not only requires a fast internet connection, but also trustworthy, reliable and affordable online storage. At the end of the day, few us will be able to store our own photo libraries on our own systems any more. The software (and storage) vendors will have the challenge to make this experience seamless and reliable. But in the end, that’s probably the only way to make photo storage sustainable.

I like Uber. As a customer, it makes my business trips easier. I get from A to B in a timely fashion and even have pleasant conversations with the driver from time to time. I don’t have to worry about whether the driver takes credit cards and there is no tipping.

But I also like Uber as a business, despite recent blunders by their management. I like them because they are disruptive. For too long has the taxi industry (if one can call it that) been somewhat of a monopoly and there were no other choices to get to, for example, the airport (assuming limos are too expensive and shuttles too inconvenient). Uber has managed to disrupt this old business model and challenged a number of key aspects: the cars are in much better shape, the drivers more professional and courteous, integration of state-of-the-art technology and no tipping or exchange of cash. Uber is now forcing the taxi industry to wae up, rethink their model and compete for the first time. And we all know that competition is good.

Of course, the critics say that Uber drivers (Uber X folks that use their personal vehicle) aren’t properly licensed and safety and insurance are an issue. But I have to ask: if licensing is supposed to make things safer, how come taxis are usually in terrible shape, with worn out, under-inflated tires, creaky ride and drivers often don’t even care to wear their seat belts, are over-tired and usually grumpy? Do I feel safer in a cab? Absolutely not, just the opposite! More often than not, I wonder how my cabby manages NOT to have an accident considering the way he drives.

I hope Uber management gets their stuff together and gets rid of some bad apples. Hopefully all the lawsuits result in more reasonable laws instead of putting disrupters like Uber out of business. I just enjoy too much the convenience of this great model and how they kick the cabbies’ asses! At the end of the day, the better and most cost-efficient experience should win and with that the customer. Right now that means bye-bye taxies!

As you might know from previous posts, I’ve been religious about weighing myself to track progress. That’s probably why my scale died. Consequently I was looking for worthy replacements. I recalled seeing the Withings Smart Body Analyzer in the Apple store and ended up ordering it from Amazon.

Remember when the iPhone forced you to rethink what you knew about what a phone was and does? That’s close to how this little miracle device made me rethink what a scale is supposed to do. This thing measures

After you’re done with measurements, it transmits the info via your WiFi network to a web service whose data you can access via the Withings Healthmate web site or an iPhone app. The latter integrates with Apple’s health app as well as MyFitnessPal. Suffice it to say these services provide you with all the tracking and graphics you could ever hope for – and more. Did I mention the scale automatically recognizes all your family members who can have their own accounts?

This sleep device has worked seamlessly so far and not only made my life easier (no more manual logging of weight etc.), it has also provided additional data and made tracking all this information extremely convenient.

Overall, I’m quite impressed so far. This is what a scale of the 21st century is supposed to do. This makes me curious to see what other companies will come up with disruptive ways to rethink what the electronics and machines around us should really be and do…