For years I have nurtured a special love for Kauai and the Kalalau Trail. (My wife would say I’m obsesses with it, but … not there’s anything wrong with that!)

After my last 4-day solo adventure on the trail, I decided to create a new site dedicated to all things Kalalau Trail. Please say hello to Hiking Kalalau!

Running has been part of my life since I was 12 years old. I’ve always done it. Now, if you therefore assume that I find it exciting or that it comes particularly easy to me (“he must be one of those runner types!”), the answer is surprisingly no.

I had always started my runs where I live. Why would I get into the car and drive somewhere? That would be a waste of time, right!? For that reason, my runs had been on pavement. No big deal. As I was getting older, I realized that my particular running style wasn’t good for my knees, so I made adjustments and switched to mid-foot strike and zero-drop shoes and things were going pretty well.

When COVID-19 hit, a number of my usual exercise options evaporated and I was on the lookout for something new. So I got in the car and drove to local trails that I knew from hiking and tried running them instead.

Ever since then, I’ve made trail running a weekly habit and I really enjoy it. Once I got the hang of it, it turned out that there are several advantages of running off the road and in nature: keep reading

It’s been a while since I figured out how to get in better shape, drop weight, and keep it off. Since then I’ve always wanted to develop a repeatable method, so I can teach this to others and also use it when coaching people. It has been more challenging and taken longer than I initially thought, but it’s done!

Check it out. I would love your feedback!

In case you hadn’t noticed, it’s been quiet from me lately. There’s a good reason for it: With Covid-19 raging on the mainland, I’ve had the unique chance to spend a few months in Kauai, which unfortunately also required two weeks of strict don’t-leave-the-house quarantine with regular check-in visits from the National Guard and local police.

However, and more importantly, I’ve finally done it and checked off a major item from my bucket list: Hike the full 11+ miles of the Kalalau Trail, a world-famous, but treacherous, and very challenging hiking trail along the Napali Coast. (For the movie buffs: check out A Perfect Getaway.)

For most people, there is a magical time of day when, under the right circumstances, they just get stuff done. Some call it a state of flow when they get absorbed by a challenging task, achieve real focus, and things just “click”. Others call it being in the zone when they are able to do really deep work and knock out sticky and mentally taxing stuff.

I like to call this time MPT, your Most Productive Time. For me, this time is in the early morning, the quiet first hour after getting ready and before meetings start and messages begin pouring in. That’s when my brain is the freshest and able to focus. This is the time when I’m best able to do deep work such as writing, coding, or diving into data analysis. When I use this precious mental clarity, I can leverage it to boost my productivity and… continue reading

I’ve been thinking about what I’m passionate about, what I excel at, and what I can do to help others.

It turns out it’s about creating good habits to keep body and mind healthy. In a way I’ve spent the last 20+ years figuring out things that work to stay healthy, be active and fit, fight off disease, and feel good. At the same time, I’ve put a lot of effort into finding good mental practices to keep my mind sharp and stay productive and balanced.

In order to share my knowledge, I’ve created a new platform called Body and Mind Over 40 – come check it out and come along for the ride!

Let’s be honest: the situation with the coronavirus sucks. With working from home and kids’ schools closed, everyone is cooped up in the house and going out to pursue what used to be normal, day-to-day activities is not an option any more. Our previous, ordinary life is suddenly … gone.

Yes, this is frustrating, disconcerting, and confusing. Cabin fever is setting in and we all suddenly miss the smallest things we used to take for granted. Time to get depressed or angry, sit on the couch, and watch endless TV while snacking on whatever comfort foods we still have?

What if we looked at this admittedly unpleasant situation as an opportunity? What if we didn’t only cope and made due, but actually got something positive out of it? Here are some ideas for … continue reading

A hike to the bottom of the Waimea Canyon, the Grand Canyon of the Pacific

I’ve been to Kauai many times and have always wondered what backpacking there would be like. Ever since seeing an article in Backpacker Magazine about the Kukui trail to Lonomea Camp (issue Jan 2019, p. 24f, “Paradise Found”), I’ve had an overnight trek down to the floor of the Waimea Canyon on my bucket list. (One day, I’ll attempt the Kalalau trail, but I’m not quite there yet.)

In early July of 2019, I finally had the chance to make this dream come true. I was hoping the time of year would not only give me longer days, but also reduce the chance of heavier rains. (On the flip side, the heat could obviously be a concern.) Since this was my first foray into the canyon and I initially planned on doing this hike solo, I selected Kaluahaula Camp as my destination. This would allow me to make it further in than Wiliwili Camp (the first camp at the bottom), avoid potential crowds, and be easier than going all the way to Lonomea Camp (by myself).

I used this detailed post as inspiration and for planning purposes and will not repeat all its details here, but just add my own commentary. I got camp site permits for a Monday (eliminating weekend crowds) and made it to the island with all the requisite gear, so I wouldn’t have to purchase anything and waste time finding things on the island. With one exception: It is not allowed to bring fuel for a camping stove on a plane, so I had emailed a local outfitter ahead of time. However, just a few days before of my trip, they let me know it wasn’t worth their time to sell me just stove fuel (they usually make their money renting equipment), so they referred me to the ACE Hardware store in Lihue, which carried the fuel I needed.

As the day for the hike approached, a hurricane was headed for the islands, but luckily it dissipated without ever reaching land, so the weather turned out warm and dry – as expected.

Fortunately, I was able to convince my hiking buddy to join me for my trip and hike and we started our decent down the Kukui trail via the Iliau Nature Loop around noon. The views of the Waimea Canyon were amazing and even though it was warm, the heat was not really a problem.

END_OF_DOCUMENT_TOKEN_TO_BE_REPLACED

At some point in our lives, we all face important and daunting questions:

These are tough questions and many of us don’t have all the answers. A number of authors and “experts” have put forth a multitude of ways to “find your way and purpose”. After some brainstorming, mind maps, and soul searching, you’re supposed to head off to the newly found true north of your life. If you put all your efforts into it and put the right energy out into the universe, things will happen for you and you will – step by step – make it to your goal, … eventually. Happy ending – story closed.

But if you’re like me, this may not work for you. There are too many options, too many unknowns to even pick your destination. If you’ve never been there, never lived through what you’re hoping to experience, how do you even know it’s right for you? How do I know if I’ll like sailing around the world in a yacht visiting tropical locations with money to spend if I currently barely have enough in the bank to spend a long weekend at the local beach? Should I just have faith and hope that – with the right amount of effort, focus, and tenacity – things will fall into place and the universe will help get me there?

At one point I was told I had “too many irons” in the fire and that I should rather focus on “the one thing”. That advice rubbed me the wrong way, but I couldn’t put my finger on it at the time. I think I know why now….

END_OF_DOCUMENT_TOKEN_TO_BE_REPLACED 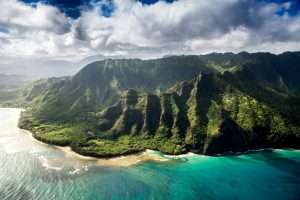 Life is full of adventures and my most recent adventure was selling a local rental property and – via a 1031 exchange – purchasing an investment property/vacation rental in Kauai. This was quite an undertaking and I’ve learned a lot about buying investment properties from afar, the local real estate market in Kauai, how to evaluate properties and how to set up and run a vacation rental. I’m now happy to own a piece of paradise in Kauai and grow roots there. Sooner or later I’m looking forward to spending more time or even retiring on the island.

The process of buying such a property far from where I live has been somewhat nerve-wrecking. I am now offering others who want to own a piece of paradise in Kauai to help them with their own adventure and put my learnings to use by making it easy for them. Interested? Check out Kauai Property Finders!